Home / Europe / Greece / Mykonos: the trendiest island in the Cyclades 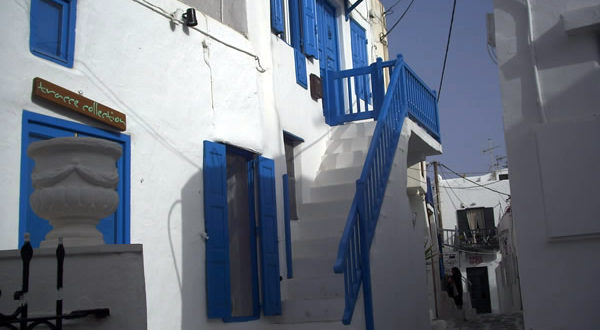 The island of Mykonos (86 sq km, 9,400 inhabitants) is located in the Aegean Sea, in the central-northern part of the archipelago of the Cyclades islands. Located east of Syros, southeast of Tinos and north of Naxos and Paros. The island is among the most important and popular tourist destinations in the Cyclades.

The most important city of the island, called Hora or Mykonos, is located along the west coast and is the arrival point of the ferries that come from Piraeus and the other Cyclades islands. Near the city there is also the airport of Mykonos, connected by frequent flights with Athens and with several European cities.

The island is mountainous, its highest peak reaches 341 meters in height. Vine and olive trees are grown there. Fisheries also have a certain economic importance. The south coast is very rugged and full of small bays where there are some beautiful beaches. While the northern coast is dominated by the vast Panormos bay where there are also some beaches.

Tourism is the main economic activity of the inhabitants of the island, Mykonos is famous for its intense nightlife and beautiful beaches. The windmills, which date back to the 16th century, are among the best known symbols of the island.

TOURIST ATTRACTIONS: WHAT TO VISIT IN MYKONOS

Mykonos, the most famous of the Cyclades along with Santorini, is often considered the most fascinating island in the archipelago. It is located north of Naxos and south of Tinos. The island, often beaten by the wind (the Etesian (Meltem)), has a barren aspect with rugged and rocky coasts interspersed with beaches and coves.

Most of the island’s beaches are located along the southern coast, where they are protected from the wind, among the best known we can mention: Paradise, Super Paradise, Platis Yialos, Lia, Psarou, Elia and Ornos.

The island is more suitable for fun and nightlife than for resting, in fact Mykonos is famous for its many clubs and many discos. Mykonos is connected by sea and air to the rest of Greece.

For those arriving by boat in Mykonos, the first impact is with the white town of Mykonos (Chora) the picturesque capital of Mykonos, which, located at the bottom of a bay on the west coast has its white houses typical of Cycladic architecture, its narrow alleys and its windmills.

In Mykonos there are some interesting museums to visit, such as the archaeological museum, with finds from Delos, the mill museum, the Navy museum and the folklore museum. In addition there are numerous churches and chapels, the most famous of which is the Paraportiani, a collection of four Byzantine-style chapels, which is located near the old Venetian castle.

Characteristic is the Alevkandra district, also called the little Venice of Mikonos, with the houses located directly on the sea. Not far away is the area of the windmills, no longer used, but characteristic symbols of the island.

TO VISIT IN THE SURROUNDINGS

Excursion to the island of Dragonissi. Then do not miss the excursion to the island of Delos (Dilos), which according to legend was the birthplace of Apollo, and which contains a very important and interesting archaeological area (Sanctuary of Apollo, Agora, Sacred street Artemision, Terrace of the Lions, Gymnasium, Theater, House of Hermes, House of Isis, House of the Dolphins, Temple of Isis) declared in 1990 a World Heritage Site by UNESCO.

HOW TO GET TO MYKONOS

The island of Mykonos is among the best served in the Cyclades.

FLIGHTS: The island has an airport, located in its south-western part. Here land flights from peninsular Greece (Athens and Thessaloniki). There are also seasonal direct connections from several European countries.

FERRIES: Mykonos is also connected by frequent ferries with Piraeus (3 hours by fast ferry) and Rafina as well as with almost all the surrounding islands.

The climate of Mykonos.

2020-02-26
admin
Previous: Rhodes Citadel: The Fortress of the Knights of St. John
Next: Santorini: a volcano that exploded thousands of years ago