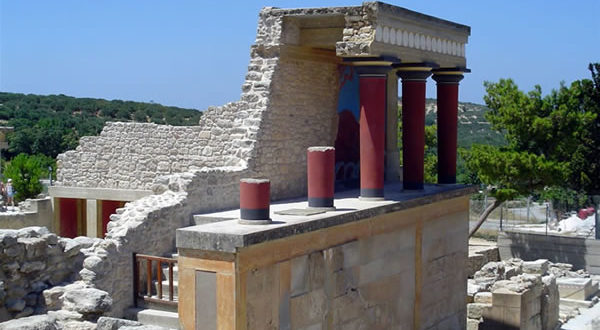 The archaeological site of Knossos is located in the central part of the island of Crete about 5 km from Heráklion.

The first palace was built around 2000 BC. and it seems destroyed by an earthquake around 1700 BC. Shortly after (1600 BC), a new, larger, building was built, which covered an area of about 20 thousand square meters. In the mid-14th century BC this palace was also destroyed, this time by fire, probably caused by the catastrophic volcanic eruption of Santorini, which caused earthquakes and tsunamis.

The palace of Knossos covers an area of about 20 thousand square meters. Knossos is the largest and most spectacular of all Minoan palaces. The site was excavated in the early 1900s by the archaeologist Arthur Evans. This archaeologist, in addition to looking for what was left, put himself in the idea of rebuilding part of the building, so much of what we can see today is the work of this reconstruction.

The palace consisted of four wings arranged around a central rectangular courtyard, which was the core of the whole complex. The east wing contains residential rooms, laboratories and a temple. The western part is occupied by warehouses with large container vessels and the throne room. The northern area contains the so-called customs and the theater area built in stone.

The Propylon (monumental gate) is located in the south wing of the building. The palace had walls decorated with splendid frescoes, for the most part religious ceremonies and natural scenes were reproduced. The excellent hotels of the cities of Heraklion, Malia or Hersonissos can be used as a base for visiting this part of the island.

On the island of Crete there are other interesting centers of the Minoan civilization. After Knossos the most important is Phaistos. Phaistos is located in the Messarà plain, in the central-southern area of the island, a short distance from the sea. Together with that of Knossos, it is one of the most important sites of the Minoan civilization. Also here are the ruins of an ancient Minoan palace dating back to the 16th century BC.

Next to Phaistos there are also the interesting remains of Agía Triáda whose oldest palace dates back to the same era as that of Phaistos. Other archaeological centers worthy of a visit are those of Malia, where the remains of an important palace are located, and Zakros, located at the eastern end of the island.

2020-02-26
admin
Previous: Balos: the most spectacular beach in Crete
Next: The west coast of Crete: Elafonissi and Paleochora