Home / Europe / Greece / Samaria Gorge: the canyon of the island of Crete 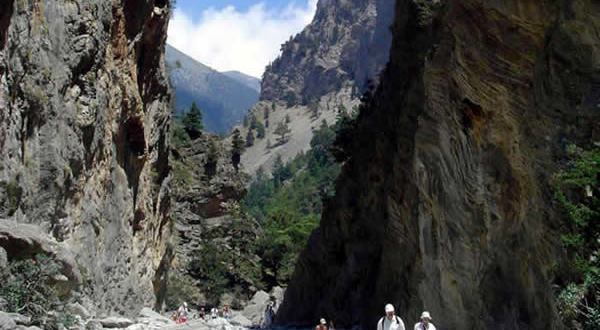 If you visit the island of Crete, the Samaria Gorge is a destination that cannot be missed. Bus excursions are organized from all parts of Crete. In addition, from Chania and Paleochora there is also a Ktel bus direct to Omalos. These excursions take tourists to the beginning of the path (Xiloscalo, at 1,000 meters above sea level) which descends to the gorges and then takes them back to the ports of Chora Sfakion or Sougia where the ferries from Aghia Roumeli disembark. Aghia Roumeli is the point where the path of the Samaria Gorges ends.

THE TRAIL OF THE SAMARIA GORGES

The path of the gorges is about 18 km long and takes between 5½ – 7 hours of walking. In addition, some degree of physical endurance is also required. Most of the route of the Samaria Gorge is downhill because from the 1,000 meters of Xiloscalo you reach the sea at the end. At the beginning of the path in Xiloscalo you also pay an entrance ticket (which must be kept until the end of the route for possible checks). The path is a slippery pavement that you go along, sometimes in a row, sometimes pressed by some hurried hiker. The trail crosses the stream several times over the wooden planks.

Along the way it is also possible to stock up on water because there are numerous sources. The most frequent mistake some hikers make is not inquiring before making the excursion of the ferry timetables for the return from Agia Roumeli to Paleochora or to Chora Sfakion. There are in fact only 2 daily connections to Chora Sfakion at 15.45 and 18 and one only for Paleochora at 17. But the times are subject to seasonal variations. Knowing the timetables of the ferries will allow you to better calculate the times and the pace of the walk, without the nightmare of doing everything running for fear of not having time to take the ferry for the return.

THE NARROW POINT: THE “SIDEROPORTAS”

Only the first part of the Samaria Gorge route is carried out in the cool under fir and pine trees. Then past the abandoned village of Samaria, the landscape becomes harsher. In this section the sun is more annoying, the heat more oppressive while the walls of the gorges rise along the stream to the “Sideroportes”. This is the narrowest point where the Samaria Gorge is only 3 meters wide.

The exit from the territory of the Samaria Gorge park is not the end of the walk. Because to get to the sea you have to travel another stretch of path (for about 20 minutes) atrociously warm and not at all interesting. Finally we reach the village of Aghia Roumeli. In this place there is an alternative between jumping into a tavern or diving into the sea, ferry permitting. You can also do the reverse route (the so-called lazy Samaria) from the sea to the narrowest point of the gorge (about 3 km) and then go back to Aghia Roumeli but in this way you lose the most beautiful part of the route.

2020-02-26
admin
Previous: How to get to Crete: flights and ferries
Next: Balos: the most spectacular beach in Crete