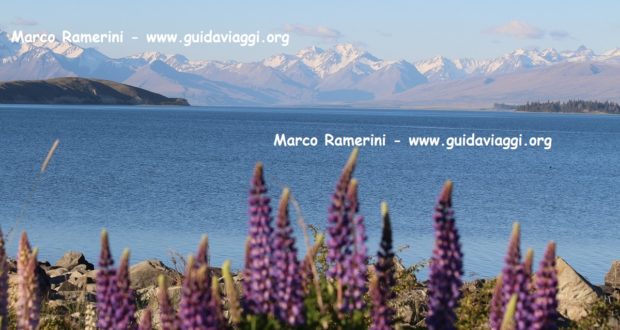 The South Island of New Zealand is the largest of the two large islands in the country, but it is also the least inhabited (151,215 km², 1,017,300 inhabitants), only 24% of New Zealanders live here. The only large city on this island is Christchurch (376,700 inhabitants), located almost in the middle of the east coast, which groups over 35% of the population of the entire island. Other cities of central importance are Dunedin (124,800 inhabitants), Invercargill (52,400 inhabitants), and Nelson (45,500 inhabitants).

The island extends between 40 ° south latitude and 46 ° south latitude, roughly the same latitudes as Italy, but upside down. The South Island is administratively divided into seven regions, from north to south: Tasman, Nelson, Marlborough, West Coast, Canterbury, Otago, Southland.

Characterized by beautiful natural landscapes, the South Island is crossed for its entire length by the chain of the New Zealand Alps, which have numerous peaks that exceed 3,000 meters in height. Here is also the highest mountain in New Zealand – Mount Aoraki / Mount Cook (3,754 meters). The mountain ranges are located more close to the western coast which is wild and overlooking the sea. In this area some tongues of ice of the Fox and Franz Josef glaciers arrive near the coast.

AN ISLAND WITH A SUPERLATIVE NATURE

The east coast, on the other hand, is separated from the mountains by a vast plain, the Canterbury Plains, at the end of which, along the coast, there is the city of Christchurch. At the southern end of the island, in front of the city of Invercargill, is the island of Stewart / Rakiura (1,746 km²). In the south of the island there is also the wonderful Catlins coast.

The South Island is famous for its scenic beauty protected in ten national parks (one of which protects the island of Stewart / Rakiura). In the island there are the high peaks of the New Zealand Alps, numerous glaciers, many lakes, and in the south-western part wonderful fjords such as those of Milford Sound and Doubtful Sound.

Booking.com
2020-04-21
admin
Previous: Northland: a spectacular coast and green hills
Next: The hiking trails of New Zealand: The Great Walk