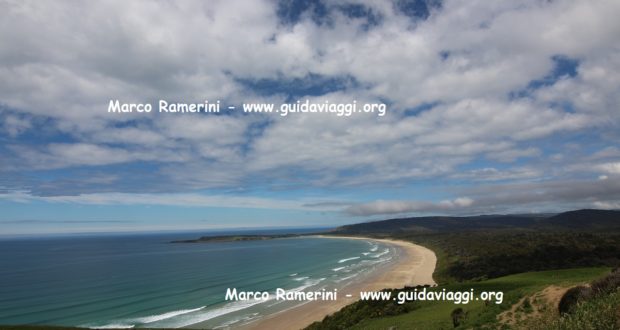 At the southern end of New Zealand, between the coastal resorts of Kaka Point and Fortrose, there is a spectacular coastline full of natural wonders. This region of the country is known for its great climate variability. A cool temperate maritime climate rich in humidity with about 150 rainy days per year. The wild natural scenery, the sense of isolation and natural attractions make the Catlins a popular tourist destination. Along this coast is Slope Point, the southernmost point of New Zealand’s South Island. The English name Catlins derives from an English ship captain Edward Cattlin who in 1840 purchased a large plot of land along the coast from the Maori. The Maori name of the region is “Te Akau Tai Toka”.

The landscape of the Catlins is a compendium of rural New Zealand with green pastures where flocks of sheep and herds of cows graze, vast areas of virgin forest, rivers, waterfalls, undulating hills and a varied coast with long sandy beaches, lagoons, caves, and high cliffs. The Catlins are crossed by the Southern Scenic Route. A 610 km long tourist road connecting Queenstown with Dunedin and passing through the most beautiful areas of the South Island of New Zealand.

A WILD AND CHARMING COAST

In the interior of the Catlins region there are vast native forests and spectacular waterfalls such as the Purakaunui Falls, located 17 km from the town of Owaka. These waterfalls together with the Nugget Point lighthouse are an iconic image of the Catlins region. Halfway up the coast are the spectacular Cathedral Caves, a group of sea caves, accessible only at low tide. These caves are located on Waipati beach, 15 kilometers south of Papatowai. Another attraction in the region are the 180 million year old fossil remains of a Jurassic forest visible at low tide in Curio Bay.

The Catlins coast is home to a wealth of marine life including sea lions, dolphins and rare yellow-eye penguins (Hoiho – Megadyptes antipodes) a species of New Zealand endemic penguins. These penguins can only be visited along this part of the coast of New Zealand’s South Island and on the Otago Peninsula, as well as on Stewart Island, and in the remote Auckland Islands and Campbell Islands.

Booking.com
2020-04-21
admin
Previous: The hiking trails of New Zealand: The Great Walk
Next: The Nugget Point lighthouse: an icon of New Zealand