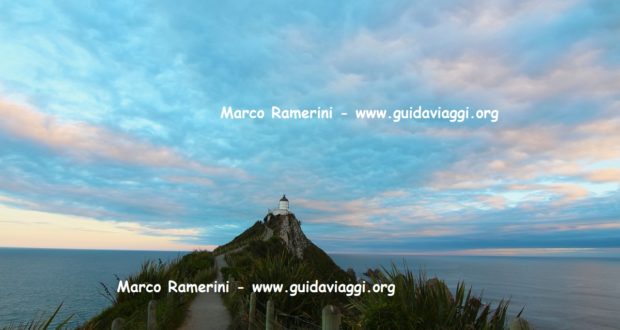 One of the most photographed places on the coast of New Zealand’s South Island is the promontory of Nugget Point with its lighthouse. This stretch of coast is located at the northern end of the Catlins coast in the Otago region.

Reaching the Nugget Point lighthouse is an exciting experience, the road to the lighthouse passes along the coast touching the small settlement of Kaka Point, a name that derives from the homonymous bird (Nestor meridionalis) an endemic New Zealand parrot. Here you can stop to admire and take a walk along the large golden sandy beach. Along this beach it is sometimes possible to meet animals such as yellow-eyed penguins, sea lions, and even leopard seals from Antarctica.

Back in the car, the road continues along the coast with an alternation of beaches and promontories. Just before the end of the road it is better to stop at Roaring Bay, on the southern coast of Nugget Point. Here a short path (just over 100 meters) to be covered on foot allows you to admire from above the pebbly beach of Roaring Bay which houses a small colony of yellow-eyed penguins or penguin of the antipodes (hoiho – Megadyptes antipodes) and sea lions.

THE PATH TO THE LIGHTHOUSE

After taking the car and making another 500 meters, after about 8 km from Kaka Point, you reach the parking lot where the road ends and where the path to the Nugget Point lighthouse begins. After leaving your car, continue on foot along an excellent path that in about 10 minutes (800 meters) reaches the lighthouse. The lighthouse begins to appear as soon as the path starts to descend, then before arriving in front of the promontory there is a small panoramic terrace from where you can admire the lighthouse and part of the rocks below. A slight ascent reaches the lighthouse, which cannot be visited, and then a suspended panoramic terrace from where you can fully admire the spectacle of the rocks, real nuggets of rock set in the Pacific ocean.

The lighthouse was built in 1869 and was put into operation for the first time in 1870. The lighthouse is still functional. The name of the lighthouse derives from the rocks that surround it and which recall, usually at sunset and dawn, the color and appearance of the gold nuggets immersed in the ocean. The site is home to many seabirds, including penguins, gannets and royal spoonbills (Platalea regia). There is also a large breeding colony of fur seals. In the waters in front of the lighthouse, dolphins, orcas and whales (humpback whales, southern right whales) can be seen.

Booking.com
2020-04-21
admin
Previous: The Catlins coast: a spectacular and wild coast
Next: Spring blooms in New Zealand: lupines and broom