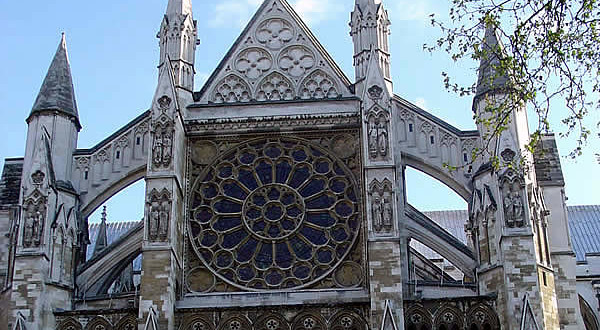 Westminster Abbey is a traditional coronation place for all British rulers. In fact, starting from the 11th century, all the kings and queens of Great Britain were crowned in this abbey. Furthermore this is also the burial place of British rulers.

In 616 a small sanctuary was founded in the place where the Abbey is today. Legend has it that the sanctuary was built in this place after a fisherman on the River Thames had a vision of St. Peter.

In the years around 1040, King Edward established his royal palace in this area of the River Thames. In its vicinity was a small Benedictine monastery founded around 960. This monastery was therefore chosen by King Edward as the site for the construction of a new large church in honor of St. Peter the Apostle.

This church has since become known as the “west minster” to distinguish it from the cathedral of St. Paul (the “east minster”) in the city of London. The new church was therefore consecrated on December 28, 1065.

THE PLACE OF CORONATION AND BURIAL OF THE BRITISH MONKS

In the mid-thirteenth century, King Henry III decided to rebuild the church in the Gothic style. By decree of the King of England, Westminster Abbey was intended to be not only a monastery and a place of worship. But above all also the place of the coronations and burials of the British monarchs. The abbey contains about 600 monuments and over three thousand people are buried there. The two western towers of the abbey were built between 1722 and 1745 by Nicholas Hawksmoor.

Since 1987, Unesco has entered Westminster Abbey on the list of World Heritage Sites. The place also contains the Palace of Westminster, rebuilt in 1840 which is an example of fine neo-Gothic architecture and the small medieval church of Saint Margaret, built in the perpendicular Gothic style.

Next to Westminster Abbey is the famous Big Ben and the Houses of Parliament, and therefore not far away are Downing Street, Buckingham Palace and the gardens of St. James’s Park.

How to get there: To reach Wesminster Abbey you can use the Westminster and St. James’s Park underground stops.