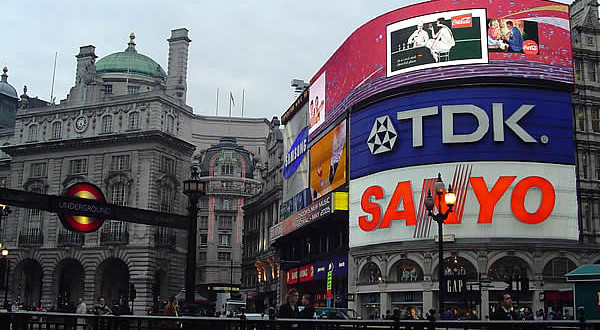 Piccadilly Circus is located at the junction of five busy streets in the heart of the West End, and has been an important landmark in the city of London for many years. In the center of the square there is a bronze fountain (Shaftesbury Memorial) with the aluminum statue of Eros by Alfred Gilbert (1892).

Having become one of the symbols of London, the square is characterized by lively advertising signs. All around there are many buildings, including the London Pavilion (originally a music room and then a cinema, it is now a shopping center) and the Criterion Theater.

Characteristic of the area are the extreme vitality and richness of life. In fact, thanks to its proximity to important commercial streets full of shops and trendy clubs such as Coventry Street and Haymarket, the square has become a crowded meeting point and an important tourist attraction.

Among the places not to be missed are the Royal Academy of Arts, with temporary and permanent works of art on display, including Michelangelo’s “Tondo Taddei”. The church of St. James (1683-1684), work of Christopher Wren, which now houses a cafe, a craft market, conferences and events. The Burlington Arcade and the Royal Opera Arcade are galleries of luxury shops. Jermyn Street houses men’s fashion stores.

How to get there: To reach Piccadilly Circus, you must use the tube station of the same name in London, which comes out right in the square. The station is located in Travelcard Zone 1, on the Piccadilly Line between Green Park and Leicester Square, and on the Bakerloo Line between Charing Cross and Oxford Circus.

Trafalgar Square, is a London square built in the nineteenth century on a design by architect John Nash. The square has at its center the famous column of Admiral Nelson, famous for having died in the battle of Trafalgar (1805) against Napoleon, the column is 50 meters high and is surmounted by the statue of the admiral.

On the square, full of beautiful fountains, there is also the National Gallery, an important museum dedicated to painting, with works by Piero della Francesca, Leonardo da Vinci and Velazquez. The National Gallery Portrait, a museum dedicated to portraits of famous people from English history and the 18th century St. Martin-in-the-Fields church are also located in the square.

Trafalgar Square, which is partly pedestrianized, is a lively gathering place both day and night.

In the surroundings of Trafalgar Square there is the Soho district, the Admirality Arch, the Theater Royal, St. James Square, St. James Park, Covent Garden, Charing Cross Road (the street of antique bookshops and used books) and Piccadilly Circus.

How to get there: To reach Trafalgar Square, you must use Charing Cross London Tube (underground) station, which has an exit right in the square. The station is located in the Travelcard Zone 1, and the Bakerloo Line and the Northern Line cross it, the closest stops are Piccadilly Circus, Leicester Square, and Embankment.