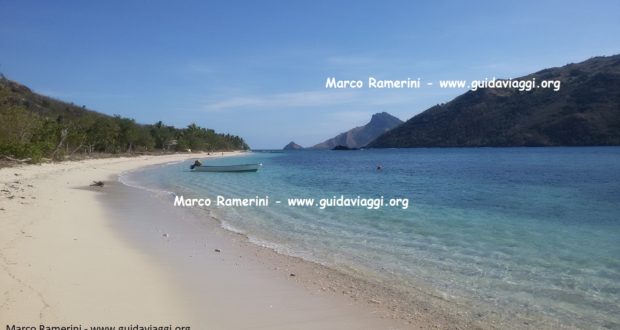 The southernmost of the Yasawa islands and therefore the first island one encounters coming from Port Denarau is the small island of Kuata. The island is located about 50 km north-west of Port Denarau in Viti Levu. The island of Kuata is characterized by the presence of strange rock formations and caves whose pitted appearance resembles that of gruyère cheese.

There is only one accommodation facility on the island: Barefoot Kuata Island. The resort is located at the northern end of the island along a beautiful coral sand beach and has Wayasewa Island in front of it. This resort mainly employs staff from the nearby island of Wayasewa. Barefoot Kuata Island is a great property offering a wide range of accommodation options for all budgets. There are dormitories with hostel-style bunk beds, the classic Fijian bures for two and the spectacular “African safari” tents located in front of the sea. The presence of this type of tents, which are usually found in safari resorts in Africa, is explained by the fact that the lady who manages Barefoot Kuata Island is originally from Zimbabwe.

WALKS ON THE ISLAND AND SNORKELING WITH SHARKS

On the island there are several paths that can be followed. The most “challenging” is the one that in about 30 minutes (2.5 km (1 hour) round trip) allows you to climb the highest mountain on the island. The itinerary winds along an excellent path, well maintained and clean. The uphill part is not too steep, the relatively harder part is the first part, then the path runs along the large boulders that dominate the island and finally rises gradually towards the top of the mountain overlooking the island. From the top you have beautiful views of the southern Yasawa and Mamanuca. Other paths allow you to visit the caves and the west coast of the island.

Kuata is famous for shark snorkeling and shark diving. Shark snorkeling is carried out on a coral reef located about 5 km (20 minutes of navigation) south-east of the island in the direction of the island of Vomo. This type of experience is suitable for all, including children. You will have the opportunity to swim with docile reef sharks: blacktip and whitetip sharks, an experience you will remember for a lifetime.

The island can be reached from Port Denarau via the fast catamaran Yasawa Flyer which stops twice a day, one stop in the morning and one in the afternoon, off the island. The time required for the crossing between Port Denarau and Kuata is approximately 2 hours. If you are in a hurry, there are also seaplane services that in a few minutes cross the sea that separates Kuata from Viti Levu.

Booking.com
2020-04-17
admin
Previous: The lagoon of the islands of Naukacuvu and Narara, Fiji
Next: A trip to Fiji: How to organize a travel to Fiji