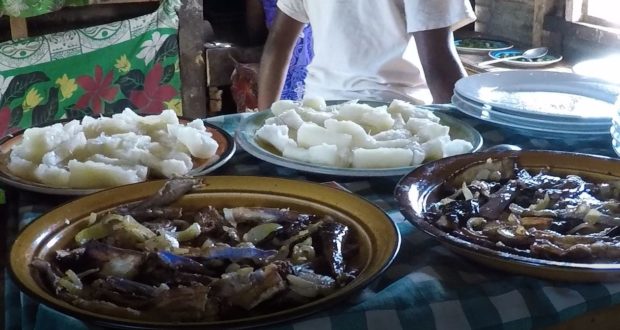 Fiji is a multicultural country where the Melanesian inhabitants of the islands and the descendants of Indian workers imported here in the nineteenth century by the British to work in the sugar cane fields live together. In addition to these two main ethnic groups there are also minorities of people from other Pacific islands, China, Australia and Europe. With this diversity of cultures, you can imagine how the cuisine of Fiji will be varied, paradise islands in the middle of the Pacific Ocean.

A MIX OF FLAVORS

Indian immigrants brought new and exciting ingredients from their homeland helping to create a new type of cuisine that prefers the use of spices and is called Indo-Fijian cuisine. Precisely for this reason the Fijian cuisine differs from that of the other Pacific islands in the use of spices that the neighboring Pacific countries do not use.

While walking in one of the numerous markets present in the various islands of this archipelago you will have the opportunity to observe the wealth of fresh products that the islands produce. These ingredients, together with the creativity of the Fijian cuisine, contribute to creating a truly diversified and fascinating cuisine.

One of the most characteristic dishes of Fiji is “lovo”. It is a traditional form of cooking that takes place underground through hot stones. This type of cooking is typical of the whole South Pacific and is used for large parties such as weddings. This is a very efficient way to cook large quantities of food simultaneously. With this type of cooking, food absorbs all flavors.

The first step in preparing a “lovo” begins by lighting a bonfire and then heating the rocks that will serve as the basis for the “lovo”. When the rocks are sufficiently heated, they are removed from the flames and placed at the bottom of a shallow hole. Then pieces of meat (chicken, pork) and fish are placed next to the burning rocks, tightly wrapped in banana leaves. Usually the meat is marinated with coconut cream, soy sauce and garlic. Taro (dalo), cassava and wild yam (uvi) are also cooked over meat and fish.

Once the hole is filled with food, the entire hole is covered with earth. Food is cooked in this way for a period of time that can vary from 2 to 3 hours. Once the food is cooked, the hole is opened and the dishes are unrolled and ready to be eaten. With this slow cooking, the food takes on a delicious smoky flavor due to the leaves and the cooking method.

Traditional Fijian cuisine is a wonderful amalgam of fresh local ingredients cooked according to the tradition that has been handed down for generations.

A famous dish from Fiji is kokodo, a dish made of raw mahi mahi (a type of fish) marinated in coconut cream, lime, onions and tomatoes. Coconut cream is an important ingredient in many Fijian delicacies.

Since a large portion of Fiji’s population is of Indian origin, Fijian cuisine also includes traditional Indian cuisine. So on a trip to Fiji you can have the opportunity to taste typical dishes of the rich Indian cuisine: such as Madrasi masala dosa (crunchy rice-based batter stuffed) or Punjabi tandoori chicken (roasted chicken with yogurt and spices).

THE TRADITIONAL DRINK OF THE FIJI: THE KAVA

The traditional drink of Fiji is Kava (or Yagona), taken from the homonymous plant of the pepper family (Piper methysticum). Kava is known to be a mild sedative whose effects facilitate people to relax and create a friendly social atmosphere.

This drink is widely consumed in villages and is a fundamental part of celebrations and rituals. It embodies the spirit of the inhabitants of the islands, its effects of relaxation, friendliness and cheerfulness are reflected in the so-called ‘Fiji Time’, that is, the philosophy of life of the Fijians who take life without stress and without haste.

Kava was originally prepared by virgin girls who chewed the roots of the plant before mixing them with water. Today the drink for hygienic reasons is prepared by stepping on the roots in a bowl. This drink is typical of the whole Pacific from Melanesia to Polynesia. Kava has a place of extreme importance in Fijian culture.

Booking.com
2020-04-13
admin
Previous: Cruise to the Yasawa Islands: Captain Cook Cruises
Next: Maupiti: experience Polynesia in contact with the population