Home / Oceania / Fiji / Monuriki: the island of the film “Cast Away” 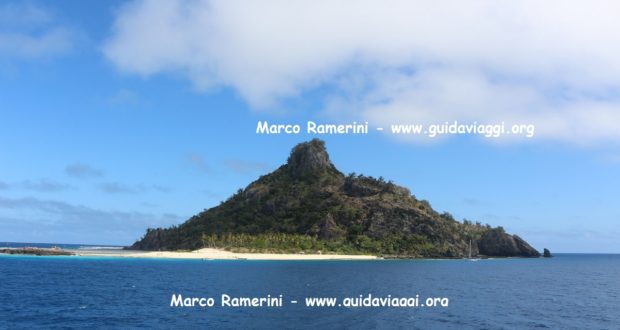 In Fiji, at the western end of the archipelago of the Mamanuca islands is the small uninhabited island of Monuriki. The island is volcanic in nature and measures approximately 1 km in length and 600 meters in width. The highest part of the island reaches 178 meters in height. The coasts of the island, surrounded on each side by a coral reef, are made up of tongues of coral sand and cliffs of volcanic rocks.

The vegetation consists mainly of pandanus and coconut trees. The island is home to a number of Fiji-crested iguanas as well as being a nesting place for sea turtles. Monuriki is very scenic and its lagoon is perfect for snorkeling. Sea turtles nest in Fiji between November and April. Four species of sea turtles are found in the waters of Fiji: the Caretta caretta (Loggerhead sea turtle), the Chelonia mydas (Green sea turtle), the Eretmochelys imbricata (Hawksbill sea turtle) and the Dermochelys coriacea (Leatherback sea turtle).

THE CAST AWAY FILM WAS FILMED IN THIS ISLAND

The island became famous for being the place where the film “Cast Away” produced by Robert Zemeckis and starring Tom Hanks, Helen Hunt, and Nick Searcy was filmed in 2000. The film tells the story of an employee of the FedEx delivery company stuck, after a plane crash, on an uninhabited island in the South Pacific. The film tells of the shipwrecked attempts to survive on the island using the remains of the cargo of his plane. This film was a critical and commercial success, and in 2001 Tom Hanks was nominated for Best Actor at the 73rd Academy Awards for his performance.

Monuriki can be reached with the three and seven day cruises of Blue Lagoon Cruises and Captain Cook Cruises. And also with the day excursions that leave from Port Denarau aboard the Seaspray. Most of the resorts on the Mamanuca islands organize day trips to the island.

Booking.com
2020-04-11
admin
Previous: The Yasawa islands: an example of eco-sustainable tourism
Next: Cruise to Mamanuca and Yasawa: Captain Cook Cruises