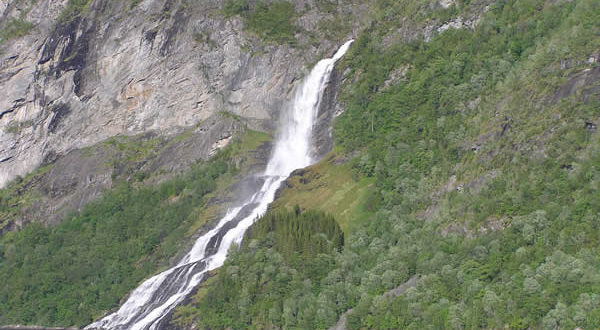 The fjords of Norway, together with the islands, are the main feature of the Norwegian coast. They are found along all the over three thousand kilometers of coastline in the country. The fjords occupy valleys modeled by ancient glaciers that have now disappeared. These valleys with the thawing of ice have filled with sea water. The fjords have spectacular vertical walls and have depths that can reach several hundred meters.

The fjords are long and narrow inlets with steep, U-shaped walls, formed thanks to the erosion caused by glaciers. The type of erosion that caused the formation of the fjords is the abrasive one. In practice, the glacier with its weight and its downward movement has dug a deep valley. Which then, at the end of the ice age, with the withdrawal of the ice, was invaded by the sea water causing the spectacular scenery that today it is possible to admire in the fjords of Norway. The fjords are very deep, some have depths greater than 1,000 meters. Most formed during the last major glaciation between 25,000 and 10,000 years ago.

SOME FJORDS ARE PART OF THE UNESCO HERITAGE

The fjords, whose name derives from the Norwegian word ‘fjord’, are found practically all along the coast of Norway. But the area where they are most spectacular is that part of the south western coast of the country which includes the four regions of Rogaland, Hordaland, Sogn og Fjordane and Møre og Romsdal.

Booking.com
2020-03-19
admin
Previous: Geiranger fjord: one of the most beautiful fjords in Norway
Next: The UNESCO sites of Norway: the heritage of humanity