Home / Europe / Norway / Geiranger fjord: one of the most beautiful fjords in Norway 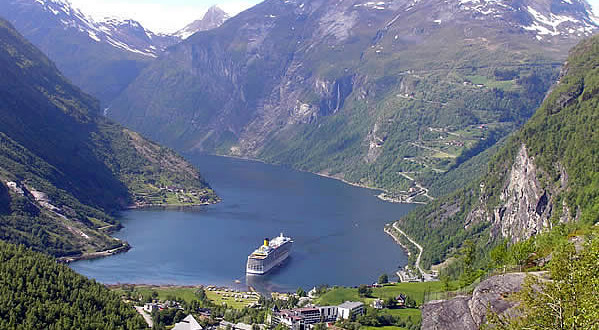 The Geiranger fjord (Geirangerfjord) is one of the most beautiful fjords in Norway. This fjord is located in the northern part of that area which is commonly called fjord Norway, in the region of Møre og Romsdal. The Geirangerfjord is a branch of the Sunnylvsfjorden which in turn is one of the final branches of the long Storfjorden near whose mouth the city of Ålesund is located.

The Geirangerfjord, one of Norway’s most visited places, is a small fjord, measuring only 15 km in length and at most 233 meters deep. But this fjord is of great scenic beauty. Because of this, the Geiranger fjord is one of two Norwegian fjords (the other being the Nærøyfjord) that UNESCO has included on the list of World Heritage Sites.

Among the excursions not to be missed, and which alone are worth a trip to Norway, one is the one that takes the ferry from Hellesylt to Geiranger. The crossing takes 65 minutes, and allows the visit of the Geirangerfjord. Take the ferry to Hellesylt, a small town located at the end of the Sunnylvsfjorden.

THE KINGDOM OF FALLS

From here after a few minutes of navigation you enter the Geirangerfjord, where there are steep rocky walls from which some spectacular waterfalls with fairytale names fall directly into the water of the fjord.

You can admire the “Veil of the Bride” (Brudesløret), a waterfall formed by several jumps for a total of about 300 meters in altitude. Other splendid waterfalls are that of the “Seven Sisters” (De Syv Søstrene), which fall for about 410 meters, and that of the “Eternal Pretender” ie the Friaren (Friarfossen), which makes a jump of 275 meters. You will not tire of admiring the drama of the landscape made of mountains, dotted here and there with small farms, and water that covers the fjord and falls precipitously from the sides of the overhanging mountains. At the end of the fjord is the village of Geiranger.

TO VISIT IN THE SURROUNDINGS:

Booking.com
2020-03-19
admin
Previous: How to get to Norway: flights to Norway
Next: Fjords of Norway: ancient glacial valleys covered by the sea