The main tourist attractions of Vienna include the two majestic imperial palaces of Hofburg and Schönbrunn. Vienna was one of the great European capitals. Until the Austrian defeat in the First World War, the city rivaled   as a center of economic, commercial and cultural power with Paris, London and Berlin.

The imposing Hofburg palace is one of main tourist attractions of Vienna. This palace was the center of Austrian power for more than six centuries, until the construction of the Schönbrunn. The palace, due to the architectural overlaps is a mixture of different styles, the oldest part is the Schweizerhof, a fortress built around 1275. Subsequently, in the 16th century the Alte Burg, the Schweizertor, the Stallburg, the Amalienburg were built.

Between the 17th and 18th centuries the Leopoldinischertrakt, the Reichskanzleitrakt and the covered riding school were built. To finish at the end of the 19th century, the Neue Burg, Michaelertrakt and Michaelertor were built. The main facade of the building overlooks Josefsplatz, where the statue of Joseph II is located, and houses the National Library, in the Prunksaal or Hall of Honor.

Also on Josefsplatz, the left side of the building houses the Augustinerkirche, a Gothic-style church where the hearts of the Habsburgs and the tomb of Maria Christina of Austria by Antonio Canova are kept. Also on this side of the building is the Albertina, the museum of graphic art. The right side houses the Stallburg, part of the Lipizzaner Museum, and the Winter Riding School.

The vast park of the complex was built after Napoleon Bonaparte, during the occupation of Vienna, had the city walls demolished. The park houses statues of Francis I and Mozart, and a series of greenhouses built in the early twentieth century in Jugendstil. The inner courtyard forms the Heldenplatz (heroes’ square) overlooked by the Neue Burg. In the square are the statues of Prince Eugene of Savoy and Archduke Charles.

THE INTERIOR OF THE HOFBURG PALACE

The Hofburg complex can be visited, inside are the state apartments and the collection of imperial treasures (one of the richest collections in the world). Among the apartments the visit is made in the rooms that belonged to the emperor Franz Joseph I of Austria and his wife, the empress Elisabeth of Bavaria called “Sissi”. 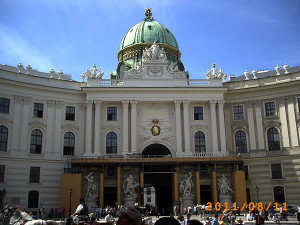 Schönbrunn Palace, which was the seat of the Habsburg imperial house from 1730 to 1918, is the symbol of imperial Vienna. This palace is another of Vienna’s main tourist attractions. The building that can be visited has among the most interesting rooms: the Grand Gallery, the Hall of Mirrors, the Elizabeth Room, the Chinese Hall, the Million Room, the Vieux-Laque Room, the Chinese Cabinet and Napoleon’s Room , where Napoleon I’s son lived and died at the age of 21.

Today the palace and French Baroque garden are one of Vienna’s most visited tourist attractions. In the garden are the Zoo (founded in 1752), the Palmenhaus (greenhouse with palm trees and tropical plants), the Orangerie, the Wagernburg (carriage museum) and the hedge maze. At the highest point of the park, stands the Gloriette, in neoclassical style. This was once a dining room, and today is a striking viewpoint for admiring Schönbrunn and the city.

OTHER ATTRACTIONS OF VIENNA

Among the religious buildings, in addition to the aforementioned Augustinerkirche, are worthy of mention the Deutschordenskirche, the Jesuitenkirche (17th century, very rich in decorations), the Karlskirche, the Peterskirche, the church of Maria am Gestade (one of the oldest churches in Vienna, 14th-15th century, example of Gothic architecture), the Minoritenkirche (13th century, in French Gothic style), the Ruprechtskirche, St. Stephen’s Cathedral (Stephansdom, Gothic, 14th and 15th century), the Schottenkirche and the Votivkirche.

The views of the city from the Riesenrad (panoramic wheel), and from the Donauturm (television tower) attract a considerable number of visitors. Other interesting places are the various residences where some of the famous musicians who lived in Vienna lived, such as Beethoven or Mozart and the cemetery of St. Marx, where Mozart’s mortal remains lie.

Modern buildings include the Gasometer (apartments and shopping center in an old gas depot), the Millennium Tower (202 meters high tower), the Karl-Marx-Hof (residential complex built between 1927 and 1930 by the urban planner Karl Ehn), the Hundertwasserhaus (complex of public housing designed by the architect Friedensreich Hundertwasser), the SCS (the largest shopping center in Europe) and the UNO-City (modern district, where the United Nations buildings are, designed by the Austrian architect Johann Staber, between 1973 and 1979). Among the cultural sites worth mentioning are the Burgtheater (the theater of the imperial court), the Wiener Staatsoper and the Spanische Hofreitschule (where Lipizzaner horses are bred and trained). Finally, the Wiener Prater is the largest public park in the city.

Vienna Museums. Which museums to visit.

How to get around: metro and urban transport.

How to get to Vienna.

The climate: when to go to Vienna.

2013-12-20
admin
Previous: The climate of Vienna: when to go to Vienna
Next: Vienna Museums. What museums to visit in Vienna