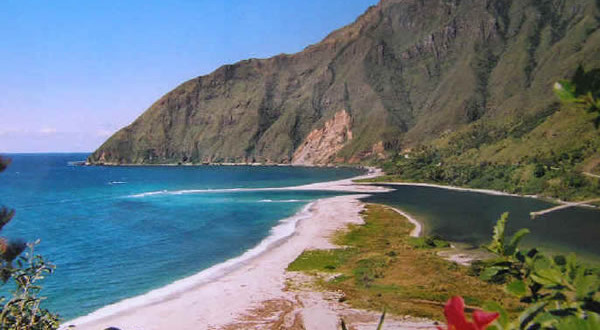 New Caledonia (Nouvelle-Calédonie) is a French “sui generis” community, located in the region of Melanesia in the southwest Pacific just north of the Tropic of Capricorn, about 1 500 km from the coast of Australia and 2,000 km northeast of New Zealand.

The territory, which includes 19,058 sq km of land that extends over a maritime area whose area reaches 1,450,000 sq km, consists of a main island, Grande Terre, the Loyalty Islands (îles Loyauté) of which are part the islands of Ouvea, Lifou, Tiga and Maré, and the small archipelagoes of îles Belep, îles Chesterfield, récifs de Bellona and other smaller islands such as the Isle of Pines (île des Pins).

Grande Terre (16,372 square kilometers) is the largest island of New Caledonia, it has an elongated shape from northwest to southeast, and is a long 400 km and between 50 and 70 km wide, it has also the highest mountain of nation Mount Panié, which rises to 1,628 meters.

In Grande Terre is the vast majority of the population, especially in the south where is the capital Nouméa. The island of Grande Terre is surrounded by one of the most extensive coral reefs of the Earth, long 1,600 km, is located between 10 and 50 km away from the coast of the island and covers a total area of 24,000 square kilometers.

The Loyalty Islands form one of the three provinces into which New Caledonia is divided. This archipelago is located about 100-150 km east of Grande Terre, between 20 and 22 ° south of the equator, and is made up of four main islands: Lifou (1,207 sq km), Maré (641 sq km), Ouvea ( 132 sq km) and Tiga (10 sq km), and some uninhabited smaller islets. The islands are raised coral atolls, where their rise has caused, with the exception of Ouvea, the disappearance of the internal lagoon, all the islands have interesting karst phenomena, caves, cavities filled with fresh or salt water, etc.

The main source of income of the country is given by the mining, in particular that of deposits of nickel for which production New Caledonia is between the first places in the world ranking (production in 2003: 111,900 tonnes, 8.7% of world production, 4 th producer in the world) and owns more than 25% of the world’s known nickel resources. In addition to nickel there are also significant deposits of iron, cobalt, copper, manganese and chromium. Among other productive activities are agriculture (vegetables, coconut palms, coffee, maize), breeding, timber, tourism and fisheries.

A LITTLE KNOWN, BUT SPECTACULAR DESTINATION

New Caledonia is one of the most remote corners of the planet, but also a place where you can admire a luxuriant nature and the traditions of a proud and hospitable population. The country is home to a pristine sea with a coral reef that stretches for hundreds of kilometers.

The climate of New Caledonia.

The site of the Government of New Caledonia.

2013-11-19
admin
Previous: Nauru: the smallest independent island state in the world
Next: Climate of New Caledonia: when to go to New Caledonia