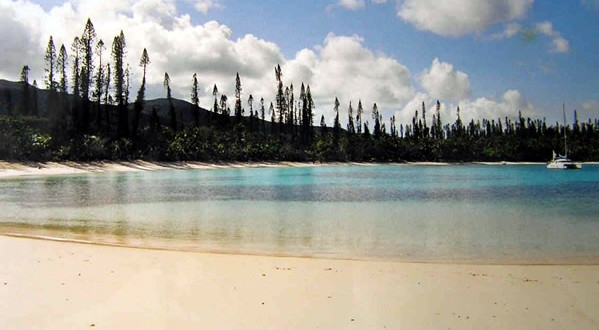 This island is one of the main tourist attractions of New Caledonia. This is mainly due to its beaches and the natural beauty it contains. In particular, the bays of Kanumera and Kuto and the “natural swimming pool” area are renowned. Tourism is by far the most important economic activity on the island.

The island is so called because of the presence in its vegetation of the columnar pines (Araucaria columnaris), a typical plant of New Caledonia that can reach 60 meters in height. These trees characterize with their presence the coasts and beaches of the island.

AN ISLAND DISCOVERED BY CAPTAIN COOK

The first European navigator to visit the Isle of Pines was the English captain James Cook in 1774. It was he who gave the present name to the island due to the presence of the columnar pines. In 1853 the island became a French possession and was used in the 19th century by France as a place of captivity. There are still the remains of the penal baths and the cemetery of the deportees of the Paris Commune.

Public transportation is not available on the island, but rental cars are available. With a rental car you can reach all the most interesting points to visit on the island. You can explore the many beaches, the Natural Pool, the numerous caves, and the remains of the penal colony. The highest point of the island, the Pic Nga, can be reached on foot via a path.

The island is one of the jewels of the country, covered with luxuriant vegetation, among the most common essences rosewood and sandalwood. But the most spectacular plant that characterizes the island are the columnar pines (Araucaria columnaris), which give it its name. The Isle of Pines is completely surrounded by the coral reef and has wonderful beaches of fine white sand, such as those of Kuto and Kanumera, and areas of unique beauty such as those of the Natural Pool and Upi Bay.

HOW TO GET TO THE ISLAND OF PINES

The Isle of Pines is connected with the city of Noumea through frequent daily flights (at least two flights a day), which depart from the city airport of Noumea-Magenta. The flight time varies between 20 and 25 minutes. The Isle of Pines is also connected to Noumea by a maritime connection made by a fast catamaran which takes 2 hours and 15 minutes to reach the island. The service is carried out 3 times a week.

What to visit on the Isle of Pines.