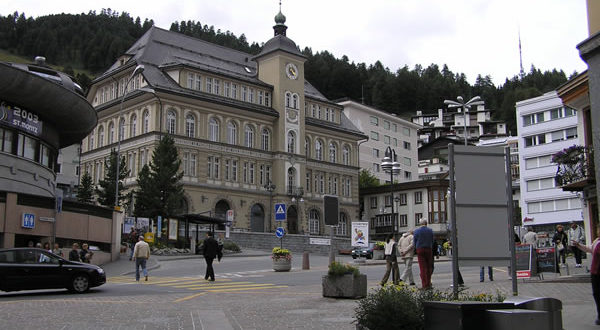 St. Moritz is probably the most famous and worldly tourist resort in Switzerland. The town is located in the upper Engadine in the canton of Grisons, in south-eastern Switzerland, near the border with Italy, and stands along the lake of the same name (lake of St. Moritz) at over 1,800 meters above sea level.

St. Moritz is immersed in an enchanting landscape, surrounded by the Alps, the Piz Bernina (4,049 meters), the highest mountain in the Eastern Alps is located a few kilometers away, and the valley extends around St. Moritz of the Engadine with the Lakes of Sils, of Silvaplana, and of Champfèr.

World-renowned summer and winter sports center, St. Moritz boasts over 300 sunny days a year, the country is divided into two inhabited centers, St. Moritz-Dorf, overlooking the lake, and St. Moritz- Bad, spa along the south-western shores of the lake. In the pedestrian center of St. Moritz-Dorf there are the Town Hall (Rathaus) and the old Protestant church (Protestantische Kirche) dating back to the end of the 18th century, not far away is the Schiefer Turm, an ancient 13th century bell tower of the Church of San Maurizio.

Among the museums to visit is the Engadine Museum dedicated to the traditions, folklore and crafts of the Engadine. St. Moritz also houses the Segantini Museum, dedicated to Giovanni Segantini, an Italian painter, among the greatest exponents of Italian divisionism, who lived in St. Moritz the last years of his life.

The St. Moritz ski area, made up of the four main areas of Corviglia / Piz Nair, Corvatsch, Diavolezza / Lagalb and Zuoz, and five smaller ski areas (Languard in Pontresina, Provulèr in Celerina, Cristins in Silvaplana, Müsella a La Punt and Bügls in S-chanf), is located at an altitude ranging between 1,800 meters (St. Moritz) and 3,303 meters (Corvatsch), and includes 350 km of ski slopes, 180 km of cross-country ski tracks and is served by 54 ski lifts. Corvatsch is the highest mountain station in the eastern Alps.

The possibilities for walks and excursions around St. Moritz are practically endless, three peaks around 3,000 meters are easily accessible via comfortable cable cars, they are the Piz Nair (3,057 meters), the Corvatsch (3,451 meters) and the Diavolezza (2,978 meters ), but many other high points are served by the 13 lifts in the area, including the Chantarella (2,005 meters), the Corviglia (2,486 meters), the Signal and the Muottas Muragl (2,454 meters).

Once you reach the altitude, many scenic trails await you, among the most scenic ones starting from Muottas Muragl, where you can enjoy a spectacular panorama over the entire Upper Engadine valley and its lakes. Among the attractions of Corvatsch is the ice cave to be seen, from here, then several paths that cross the typical high altitude landscapes of Switzerland, between lakes and pastures. The itinerary called Via Gastronomica is very particular, of varying duration (between 90 minutes and 4 hours), which always leads to a refreshment point where you can taste the specialties of the local gastronomy. There are many paths dedicated to children and families.

There are about 400 km of itineraries for bicycles and mountain bikes available in the St. Moritz area, there are routes with every degree of difficulty, which will satisfy every enthusiast.

Thanks to the presence of numerous lakes it is possible to practice water sports such as sailing, windsurfing, rafting on the Inn river, or fishing. St. Moritz is also famous for golf, it has five golf courses with a total of 60 holes.

St. Moritz is also located a short distance from the Swiss National Park, a paradise of alpine flora and fauna, which stretches for 172 square kilometers between the Upper and Lower Engadine and where there are over 80 km of marked trails waiting for you.

St. Moritz has numerous alternatives for your stay, ranging from classic Alpine hotels, to wellness centers with saunas and massages, to small bed and breakfasts, to holiday homes and apartments, of all sizes and shapes. You will certainly find the right accommodation for your skiing holiday or your weekend.

HOW TO GET TO ST. MORITZ

Train: St. Moritz is well connected to the Swiss railway network. The St. Moritz railway station (1,775 m) is located along the Albula and Bernina railways. From Italy it is possible to reach St. Moritz by rail via Milan, Colico, Chiavenna and from here with a bus service to reach St. Moritz, generally it takes about 5 hours. Another alternative is the Bernina railway (Bernina Express) which connects Chur (Chur) in Switzerland with Tirano in Italy and which also stops at St. Moritz station, this route is also very interesting from a landscape point of view, and the beauty of the landscape crossed earned her the inscription, in 2008, in the list of UNESCO World Heritage Sites.