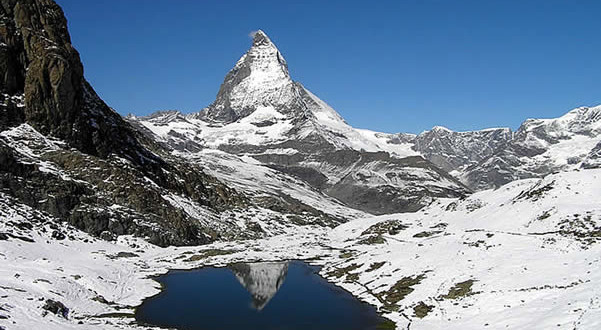 Switzerland (Schweizerische Eidgenossenschaft/Confédération suisse/Confederazione Svizzera/Confederaziun svizra) is a federal state located along the Alps north of Italy and divided into 26 cantons. The country is bordered to the north by Germany and France, to the east by Austria, Liechtenstein and Italy, to the south by Italy, to the west by France. The most important cities besides the capital Bern, are Zurich, Basle, Geneva, Lausanne, Lucerne, Lugano, St. Gallen and Winterthur. The formation of the ancient Confederation dates back to the late medieval period. Switzerland is one of the richest and most developed countries in the world.

The main feature of the Swiss territory are mountains. The country is made ​​up of three very different geographical regions: to the south the Alpine area (60% of the total area of the country), in the center is an area called the Pre-Alpine Plateau (27% of the territory) and to the northwest is the mountain range, which forms the Swiss Jura.

The mountains of Switzerland reach considerable heights, especially in the canton of Valais/Wallis with the peaks of Monte Rosa (Punta Dufour with 4.637 m, the highest mountain of Switzerland), the Weisshorn with 4.505 m, the Matterhorn with 4.478 m and the Grand Combin with 4.314 meters.

In the Alps of the canton of Grisons/Graubünden the peak of the Bernina exceeds 4.000 m. The Bernese Alps have the chains of Finsteraarhorn with 4.274 meters, the Jungfrau with 4.158 meters and the Aletschhorn with 4.195 m. Here is also the largest glacier in the Alps the Aletsch Glacier with 101.7 sq km.

Among the rivers we can quote the Rhine, the Rhone, the Inn and the Ticino. The country has many lakes. The largest and most important are Lake Geneva with 582 sq km, divided between France and Switzerland and Lake Constance with 536 sq km, shared by Germany, Switzerland and Austria. Lake Neuchâtel with 218 km², Lake Zurich with 88 km² and Lake Lucerne with 113 km² belong entirely to Switzerland.

The climate of the country.

Official site of the Swiss government.

2013-12-30
admin
Previous: The climate of Sweden: when to go to Sweden
Next: Switzerland tourist attractions: what to see in Switzerland