Home / Europe / Switzerland / The climate of Zermatt: when to go to Zermatt 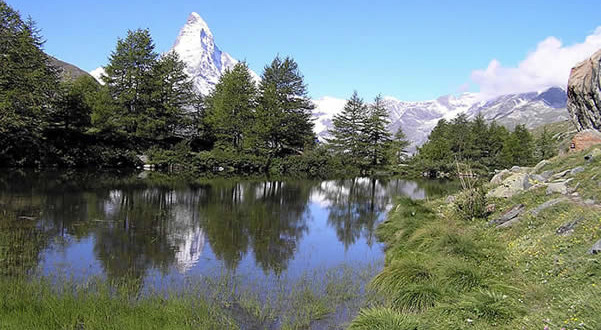 Valais is characterized by a pleasant, very dry and particularly mild climate until late autumn. The climate favors Zermatt, located at over 1,600 meters above sea level, thanks to its position facing south, protected from the wind and guaranteed snow during the winter.

The average annual total of rainfall is around 611 mm per year, the months with the least rainfall are the winter months between January and March. Zermatt has an annual average of only 92 rainy days. The snow falls copiously during the winter months, but in the surrounding mountains it can snow even in the middle of August. Zermatt has an average of 1,684 hours of sunshine per year.

The surrounding mountain areas, especially along the border with Italy, are, compared to the altitude, much colder and rainier. For example, at the top of Monte Rosa, the annual average rainfall is 4,100 mm.

WHEN TO GO TO ZERMATT

Easily reachable through a practical train service, Zermatt is a destination for every period of the year, snow lovers can visit it in the winter months, but also in spring and autumn, summer is the best time for walking lovers. The Matterhorn mountain can be admired at any time of the year.

THE CLIMATE OF ZERMATT: CLIMATE TABLES

Booking.com
2020-03-26
admin
Previous: The climate of Lucerne: when to go to Lucerne
Next: Zermatt: famous ski center on the slopes of the Matterhorn