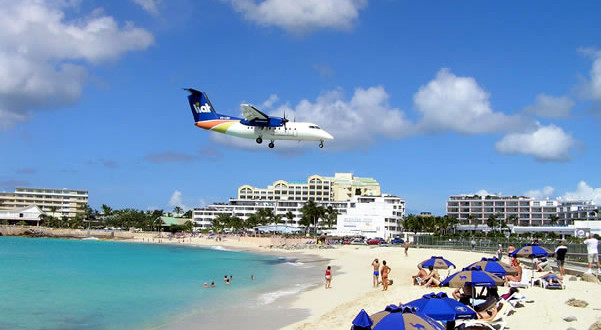 Named after Princess Juliana of Holland, Princess Juliana International Airport (SXM) is also a popular tourist destination on the island. In fact, this airport is known all over the world for its airstrip that starts close to the beach of Maho Bay and which allows you to watch spectacular aircraft landings directly on the beach or from the nearby bar.

For those traveling from Europe, there are various possibilities to reach the island of Saint Martin. Probably the best option is to fly to Paris, a city that is well connected to the main European airports through both scheduled and low cost flights. The city of Paris is in fact the best connected with the island of Saint Martin / Sint Maarten. Flights to Saint Martin depart from the Parisian airports of Charles de Gaulle and Orly. Frequent Air France flights depart from Paris-Charles de Gaulle airport. While Corsair International and Air Caraïbes flights depart from Orly airport. The flight time between Europe and Saint Martin / Sint Maarten varies between 10 and 12 hours excluding stops and plane changes.

Another European city directly connected with the island of Saint Martin / Sint Maarten is Amsterdam in the Netherlands from here the KLM flights depart. Amsterdam Airport also has excellent connections with the rest of Europe.

In the French part of Saint Martin, in the north of the island, there is another small airport, the Espérance Airport (SFG). This airport has daily connections with the French islands of Guadeloupe and Saint-Barthélemy.

2020-01-29
admin
Previous: Tourist attractions in Jamaica: What to see
Next: Curaçao: the largest of the Dutch Caribbean islands