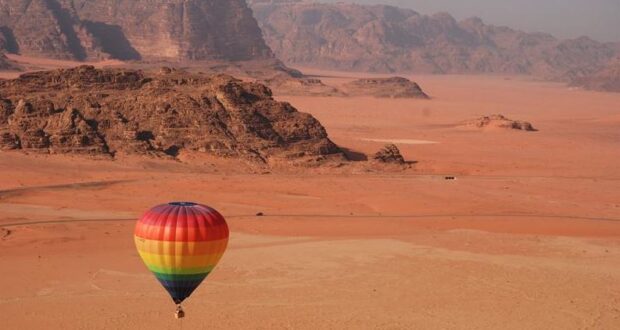 In the extreme south of Jordan on the border with Saudi Arabia, less than an hour’s drive from the town of Aqaba on the Red Sea and less than one hundred kilometers from Petra, is the country’s most beautiful landscape, Wadi (uadi) Rum. The landscape that characterizes this area also extends beyond the Jordanian territory and also characterizes the northwest of Saudi Arabia.

The name uadi (wadi) indicates the bed of a dry river, typical of the desert environment. This desert environment is famous for its wonderful landscapes, but it is also known for the numerous human testimonies that characterize it. In this area man has left traces starting from 8,000 years before Christ. Tens of thousands of rock carvings have been found in the rocks of the region. Starting from the 4th century BC, the Nabataean civilization flourished in this area and reached its peak with the construction of the wonderful city of Petra. More recently the area was the scene of the exploits of Lawrence of Arabia.

A DESERT OF SANDS AND COLORED ROCKS

The landscape is characterized by canyons, rock formations, sand dunes and rugged mountains. The highest mountain, Mount Jebel Umm al-Dāmī (1,830 meters), is located along the border with Saudi Arabia. While at the center of Jordan’s Wadi Rum is Mount Jebel Rum (1,754 meters).

The colors that characterize the rocks and sands of this desert are unique. Wadi Rum is one of Jordan’s most popular tourist destinations and attracts numerous foreign tourists. Here it is possible to stay overnight in the Bedouin camps located in the desert and admire the wonderful starry sky free from artificial lights. Popular activities for tourists include 4×4 tours, camel rides, camping under the stars, horseback riding, and rock climbing among the towering rock formations.

This area of Jordan has often been used as a filming location for numerous films. Many of these films are science fiction films set on Mars. In 2011, over 74,000 hectares of the Wadi Rum area was included, as a mixed natural and cultural site, among the places of the UNESCO World Heritage Site.