Home / Asia / Jordan / The climate of Jordan: when to go to Jordan

The climate in Jordan is affected by the proximity to the sea and the continental features, this results in a climate of transition that leads to discrete rainfall on the slopes of the Judea and Samaria, and a largely desert climate, arid and dry, as we go towards east and south.

The Mediterranean climate is characteristic of the westernmost areas close to the coast, in the Judean mountains there are annual precipitation values that sometimes reach 1,000 mm, but generally they are between 600 and 800 mm per year. In these areas there is a cool and relatively humid season between November and April and a hot and dry season between May and October.

In the most eastern areas, rainfall is lower, in the Jordan valley there is 400 mm of rain per year. While in the capital Amman the annual average is 245 mm. In the desert areas of eastern and southern Jordan, rainfall is less than 100 mm per year.

The wind is another factor that characterizes the climate of Jordan, the sirocco (Khamsin) when it blows, it causes a sudden rise in temperature of several degrees, the wind blowing during summer also brings dry air and sand.

WHEN TO GO TO JORDAN?

The best time to visit Jordan are the months between September and October, and between April and May, season when the temperatures are pleasant and often the weather is nice. 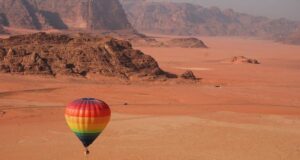