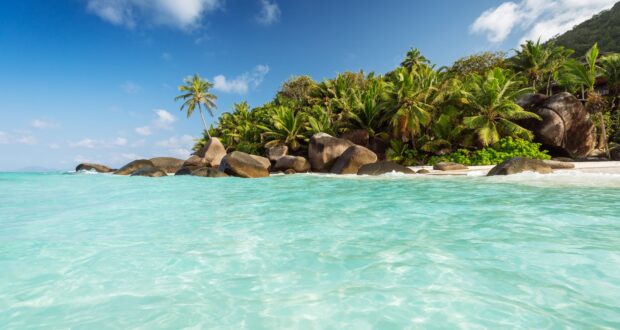 Silhouette is a small mountainous island in the Seychelles which is located about 20 km northwest of the largest island in the archipelago, Mahé. Its surface is just over 20 square kilometers, but in such a small space the island contains all the aspects that have made the Seychelles a very popular tourist destination, both for lovers of the sea and for those who love diving or just admire the lush nature of these tropical islands.

The island has a vaguely circular appearance and is dominated by a mountain over 750 meters high, Mont Dauban or Mont Plasir. In total there are five peaks that exceed five hundred meters in height. The whole island is characterized by green mountains covered with tropical vegetation that often reaches the sea. Mainly coconut palms and takamaka trees (Calophyllum tacamahaca) grow there.

THE ISLAND OF THE DAUBAN FAMILY

In 1771 the French navigator, Charles Ogier, landed on the east side of the island at Anse La Passe. The island’s name derives from Étienne de Silhouette (1709-1767) who was French finance minister under Louis XV. At the time, the Seychelles was a French colony. About 200 people live on the island today, divided into two small villages: Grand Barbe, on the west coast, and La Passe, on the east coast.

For about a hundred years, the island was owned by the Dauban family, a family of French descent, who hailed from Mauritius. The Dauban promoted the development of extensive coconut plantations on the island for the production of copra. The old manor house has now become a museum that tells the story of the family and its connection with Silhouette. Near the village of Grand Barbe there is another historical testimony dating back to 1864, the Mausoleum of the Dauban, a building in the shape of a classical temple where some members of the family are buried.

WHERE TO STAY AND HOW TO GET THERE

On the island there are some lodges and guesthouses as well as a hotel of the Hilton chain, the Labriz Resort & Spa. The island can be reached directly from Mahé International Airport with a 15-minute flight by helicopter. Or with a boat ride of about 45 minutes departing from the Bel Ombre pier.

2021-01-18
admin
Previous: Wadi Rum: landscapes from another planet
Next: Anse Lazio: The most beautiful beach on Praslin 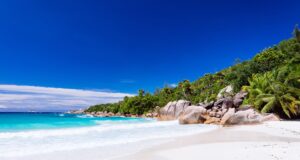