Spain (Reino de España/Kingdom of Spain) is a parliamentary monarchy, which lies in the south-westernmost part of Europe. Spain is located on the Iberian Península, of which it occupies approximately 85%. The remaining 15% are occupied by Portugal. Spain also includes the islands of the Balearics in the Mediterranean Sea and the Canaries in the Atlantic Ocean.

The capital city is Madrid, while the other main cities are Barcelona, ​​Valencia, Seville, Malaga, Granada, Cordoba, Bilbao, Salamanca, Zaragoza, Valladolid, Burgos and Toledo. Spain is a member of the European Union.

Much of Spain is covered by the Meseta, a vast interior plateau. To the north the Cantabrian mountain range, which includes the Picos de Europa with 2,648 m, forms the northern edge of the Meseta. To the east the margin of the Iberian Meseta is marked by a complex array of chains, which at various points exceed 2,000 m, even reaching 2,313 m in the Sierra del Moncayo.

Finally the southern side of the Meseta is formed by the Sierra Morena mountains with 1,323 m beyond which the Andalusian plain with the Guadalquivir valley is to be found, separating the Meseta from the Betico system, touching greater heights in the Sierra Nevada with peaks beyond 3,000 m. Here is the highest peak of the Iberian Peninsula: Mount Mulhacén with 3,478 m.

Also high altitudes reach the Pyrenees through the Pico de Aneto with 3,404 m, which form a natural border of northeastern Spain with France from the Atlantic Ocean to the Mediterranean Sea for more than 400 km.

Spain is rich in rivers. There are five major rivers. Four of them the Tagus/Tajo, Duero, Guadiana and Guadalquivir flow into the Atlantic. The Ebro, however, runs south of the Pyrenees, flowing into the Mediterranean Sea. The Duero Basin is with more than 98,375 sq km the largest of the country. The Tagus/Tajo with its course of 1,007 km is the longest river of the Iberian Peninsula.

The Balearic Archipelago is located in the Mediterranean Sea between the east coast of Spain and Sardinia. It has an area of ​​4,992 square kilometers and 796,400 inhabitants. The capital city is Palma de Mallorca. This archipelago is formed by the islands of Majorca, Menorca, Ibiza, Formentera and smaller islands.

The archipelago of the Canaries lies a few hundred kilometers off the African coast of Morocco. It has an area of ​​7,447 square kilometers and 1,630,000 inhabitants. The capital is the city of Santa Cruz de Tenerife. The archipelago consists of seven main islands: Tenerife, Gran Canaria, Lanzarote, Fuerteventura, La Palma, Gomera and Hierro. On the island of Tenerife is the highest mountain of the archipelago and the highest summit of Spain: the volcano of Pico de Teíde with 3,710 m.

admin
Previous: Slovenia climate: when to go to Slovenia
Next: Spain tourist attractions: what to see in Spain

Andalusia Climate: when to go to Andalusia

Canary Islands climate: when to go to the Canaries

Spain climate: when to go to Spain 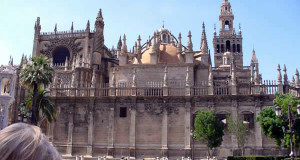 Spain tourist attractions: what to see in Spain