Home / Europe / Spain / Seville: capital of Andalusia and port for the Americas 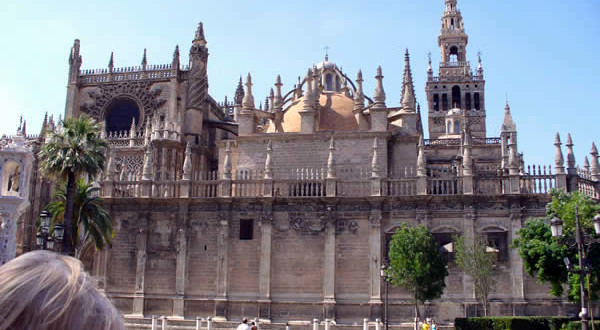 Seville: capital of Andalusia and port for the Americas

Seville, in Spanish Sevilla, is an important city of over 700,000 inhabitants. This beautiful city, capital of Andalusia, is the artistic, cultural, financial, economic and social center of southern Spain. The city lies several tens of kilometers inland along the course of the Guadalquivir river. Many of the expeditions to the New World left from its river port and fleets loaded with gold and silver arrived here. In fact, it was here that the Casa de Contratación, the government agency that controlled all the trade of the Spanish empire, was based.

The city of Seville has Iberian origins, its ancient Roman name was that of Hispalis. In 206 BC the Romans founded the city of Italica, the ruins of which are visible today.

In 711-12 Italica was conquered by the Arabs who gave it the name of Ishbīliya, from which the current name derives. The city flourished during the period of Arab domination, which lasted for over five centuries, leaving important cultural traces and monuments still visible today. Seville was the capital of one of the most powerful taifa kingdoms in Muslim Spain.

In 1248 it was reconquered by the forces of Fernando III of Castile. The discovery of America by Christopher Columbus and the subsequent birth of the Spanish empire made Seville the main port of connection with the New World and the largest city in Spain. At that time (in 1649) the city came to count a population of 130,000 inhabitants.

WHAT TO SEE: THE MAIN ATTRACTIONS OF SEVILLE

In 1987 UNESCO declared the three most important monuments of Seville as a World Heritage Site: the Cathedral, the Alcázar and the Archivo General de Indias.

These three buildings represent the monumental complex of the city, the Alcázar and the Cathedral represent the two periods of maximum splendor. The Arab one of the Almohad, of which the Giralda minaret is the architectural masterpiece and the subsequent Christian period represented by the five-nave Catholic Cathedral, the largest Gothic building in Europe (for the volume occupied), with the tomb of Christopher Columbus.

THE ARCHIVE OF THE INDIES

Of significant cultural and historical importance is the Archivo General de Indias, located in the ancient exchange market (the ancient Lonja). A 16th century Renaissance style building designed by Juan de Herrera, which holds millions of original and unique documents about the Spanish colonies in America and the rest of the world. In Seville, the most important and richest archives of documents of the Spanish administration in the Americas are still kept in the Archivo General de Indias.

THE ALCAZAR: THE ROYAL CITADEL

The Alcázar, that is, the royal citadel with its gardens, is an architectural jewel of the Arab era (9th century). Originally it was part of the defense works of the city, later it became the royal residence. The structure was however remodeled in the 14th century. The interior is arranged around two courtyards, the courtyard of Las Doncellas and that of Las Muñecas. The ambassador’s room, decorated in Mudejar style, is among the most beautiful rooms.

THE CATHEDRAL AND THE GIRALDA

In front of the Alcázar is the Cathedral, built between 1401-1519 above the Mosque, of which the magnificent Giralda minaret remains. This is one of the symbols of Seville, today it is the bell tower of the Cathedral, from which you can enjoy a beautiful view of the city. The Cathedral contains examples of various architectural styles, Mudejar, Renaissance, Baroque, although Gothic is what dominates and characterizes the structure. The courtyard called Las Abluciones and the Del Perdón gate are also part of the old mosque from the Arab period. The mosque was transformed into a cathedral after the Christian reconquest of 1248.

The entrance to the cathedral is through the Plaza de la Virgen de los Reyes. The interior, with five naves, is immense, reaches a maximum height of 40 meters at the transept, while the main rectangular base measures 116 meters in length and 76 meters in width. Inside, as already mentioned, there are the remains of Christopher Columbus. The Almohad-style Patio de los Naranjos features a Visigothic source, the only remnant of the original Visigothic temple, built before the mosque.

In the same square of the Cathedral is the Palacio Arzobispal, which was built in the mid-sixteenth century in place of the ancient palace of the first bishop of Seville, notable is the Baroque portal of the eighteenth century. Another building from the Arab era is the so-called Torre de Oro, an octagonal tower, built in the 13th century near the river to defend the city, today houses the Maritime Museum.

THE DISTRICTS OF TRIANA AND SANTA CRUZ

Among the neighborhoods of Seville the most characteristic is the Triana district. This neighborhood is located on the right bank of the Guadalquivir, connected to the rest of the city by the Isabel II bridge or Triana bridge, built between 1845 and 1852. In the neighborhood you can visit: the church of Santa Ana (XIII century), the convento de las Minimas (1755), the church of San Jacinto (1775) and the remains of the castle of San Jorge seat of the Inquisition. Another interesting neighborhood is that of Santa Cruz, one of the historic barrios of Seville, is located in the center of the city, and is full of houses and stately buildings, it was originally the Jewish quarter, the Judería of Seville.

Among the places of interest for a visit are the Palacio de las Dueñas, today’s residence of the Dukes of Alba. It was built between the fifteenth and sixteenth centuries, the palace is composed of a set of patios and buildings in different styles ranging from Gothic-Mudejar to Renaissance style. The Casa de Pilatos adorned with azulejos mudéjares and gardens, was built at the end of the fifteenth century in the Italian Renaissance and Spanish Mudejar style, it is considered the prototype of the Andalusian palace.

The Alameda de Hércules is one of the historical walks of the city, built in 1574, it is located between the Guadalquivir river and the Macarena district. The Caños de Carmona, are the remains of a Roman aqueduct, which was partially demolished in 1912. The Plaza de Toros de la Real Maestranza de Caballería de Sevilla is the oldest bullfighting arena in all of Spain, its construction it was in fact started in 1749.

The modern architecture of the city is also interesting. In particular, most of the installations of Expo 92 that have been converted into the theme park of the Magic Island and the monumental Alamillo bridge over the Guadalquivir river by the architect Santiago Calatrava. The Plaza de España, designed by the architect Aníbal González, is the remaining monument of the 1929 exhibition.

TO SEE IN THE SURROUNDINGS

Among the places to visit around Seville we can mention the remains of the ancient city of Italica, the birthplace of the Roman emperors Trajan and Hadrian. This Roman city is located a few kilometers north of Seville near the monastery of San Isidoro del Campo. Here you can admire wonderful mosaics, a beautiful theater and an amphitheater.

Among the towns around Seville worthy of a visit are Carmona, a small village with a 15th century tower in imitation of the Giralda of Seville. Écija, which is known for its baroque bell towers. Alcalá de Guadaira instead presents some impressive Arab fortification works.

In the town of Osuna, there are interesting houses from the 16th and 18th centuries as well as an impressive collection of works of art inside the Collegiate Church. Estepa is full of Baroque buildings. Other interesting villages are Morón de la Frontera, Marchena and Cazalla de la Sierra.

Not far from Seville there is another site declared a UNESCO World Heritage Site in 1984, the Parque Nacional de Doñana. The park occupies the right bank of the Guadalquivir river at its mouth in the Atlantic Ocean. The area is important for its biodiversity, there are stretches of lagoons, swamps and dunes. During the winter the place is frequented by over 500,000 water birds.

HOW TO MOVE: UNDERGROUND AND URBAN TRANSPORT IN SEVILLE

The urban transport of Seville, which is managed by the municipal company TUSSAM (Transportes Urbanos de Sevilla), is divided into more than 40 bus lines that connect the various districts of the city with the historic center. The city has a tramway line with a 2.2 km route and a light rail network with 22 stops and a length of 19 km.

HOW TO GET THERE: FLIGHTS TO SEVILLE

Seville airport is the San Pablo Airport (IATA: SVQ) which is located 9 km east of the city. Seville is connected by flights with several European countries including the United Kingdom, France, Germany, Italy, Portugal, Switzerland and the Netherlands. Among the most active airlines we find Vueling, Iberia, Ryanair and EasyJet.

The climate of Seville.

Booking.com
2020-03-25
admin
Previous: Ronda: picturesque ancient town of the Pueblos Blancos
Next: The climate of Seville: when to go to Seville

Tenerife, the main tourist destination of the Canary Islands, enjoys a particularly ...