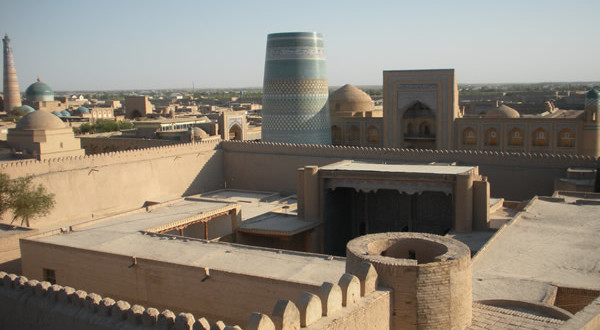 Uzbekistan (Uzbekiston Jumhuriyati) is a presidential republic located in central Asia. This state independent from the end of the Soviet Union is bordered by Kazakhstan to the north and west, Kyrgyzstan and Tajikistan to the east, Afghanistan and Turkmenistan to the south. The state of Uzbekistan also includes the autonomous republic of Caracalpachi (Karakalpakstan).

The main cities, besides the capital Tashkent, are Samarkand, Nukus, Namangan, Andijon, Bukhara, Fergana. Uzbekistan is largely formed by the plains of the Turan Lowlands, comprising desert areas such as Ustjurt and Kyzylkum.

To the east are the Pamir, Hindukush and Tien Shan mountain ranges. This is where the highest mountain in the country is located, Mount Khazret Sultan which reaches 4,643 meters.

A VERY FERTILE VALLEY IN AN ARID COUNTRY

The most fertile area of Uzbekistan is the Fergana Valley, an area of approximately 21,440 sq km east of the Kyzylkum desert. This fertile area is surrounded on three sides by mountains while the course of the Syr Darya River is to the west. The Syr Darya (2,200 km long) together with the Amudarja (2,400 km long), which flows along the southern border, are the main waterways that cross Uzbekistan. Both rivers are tributaries of the Aral Sea.

The Aral Sea, located on the border with Kazakhstan, was once the world’s fourth largest inland sea by surface. The lake, in fact, was at the time about 68,000 sq km large. But since 1960, the lake is rapidly drying up because of water withdrawals on its two tributaries for agricultural purposes, mainly for cotton plantations. Today its surface has decreased by about 90%.

Agriculture is the country’s main economic resource. 10% of the territory of Uzbekistan is agricultural land, where cotton is mainly grown. Other products are rice, vines, wheat, barley, tobacco, vegetables and fruit.

About 46% of the territory is suitable for breeding, sheep, cattle, pigs and goats are raised there. The subsoil is rich in natural gas, oil, coal, lignite, gold, uranium, copper.

The climate of Uzbekistan.

2013-11-28
admin
Previous: Turkmenistan: the great desert of Karakum
Next: The climate of Uzbekistan: when to go to Uzbekistan

The climate of Uzbekistan: when to go to Uzbekistan