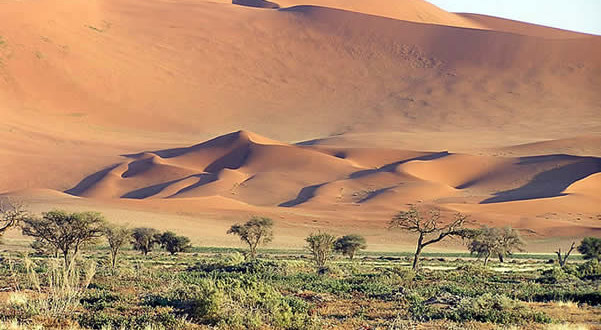 Africa, the continent that was the cradle of humanity, an area equal to 30,225,000 square kilometers and is after Asia, the second largest continent in the world, representing 20.3% of the land on the planet, its inhabitants, more than 900,000,000, constitute 14% of the world’s population. Africa, triangular shaped enlarged in the north, is oriented along the north-south axis, with the southern section in the shape of a triangle with the peak facing south. The continent is washed to the north from the Mediterranean Sea, to the northeast from the Suez Canal and the Red Sea, to the east and southeast from the Indian Ocean, to the west from the Atlantic Ocean.

Africa is almost completely surrounded by sea, the only connection with other continents is the Sinai Peninsula that unites with Asia, while the Straits of Gibraltar and the channel of Sicily separate it from Europe. The northernmost point of the continent is Ras Ben Sakka, west of Cap Blanc, Tunisia (37° 21’N) and the southernmost point is Cape Agulhas in South Africa (34° 51′ 15″S), the westernmost point is Cape Verde (17° 33′ 22 “W) and the easternmost is Ras Hafun in Somalia (51° 27′ 52” E).

Few are the islands, the only large one is Madagascar (587,000 square kilometers, after the Greenland, New Guinea and Borneo island is the fourth largest island of the world), located in the Indian Ocean, east of Madagascar, there are the islands of Reunion and Mauritius, while more north there is the archipelago of the Seychelles and northwest that of Comoros, off the coast of Somalia is the island of Socotra. In the Atlantic Ocean the presence of islands is still smaller, in the Gulf of Guinea are the islands of Fernando Poo (Bioko), Sao Tome, Annobon, and Principe; off in the open Atlantic Ocean are the isolated islands of Ascension, St. Helena and Tristan da Cunha, while along the west coast are the islands of Cape Verde, the Canary Islands and Madeira.

Africa has the structure of a single large plateau, excluding the chain of Atlas mountains in Morocco. Differences in height have been caused by faults and fractures that have raised and lowered whole plates, these movements of the earth’s crust have led to the formation of volcanic cones of Kilimanjaro and Mount Kenya in East Africa and resulted in the formation of the Rift Valley and the high plains of eastern and southern Africa.

The northern part of the continent is characterized by the presence of the Sahara, the largest desert of the world, which extends from the Atlantic Ocean to the west, the Mediterranean Sea in the north, the Red Sea to the east, and south to the semi-arid strip known as Sahel, with a total surface area of 9,100,000 sq. km. The region has some isolated reliefs as the Tibesti Massif in Chad, whose main peak is the Emi Koussi (3,415 meters), and the Hoggar in Algeria that with Mount Tahat reaches 2 ,918 meters. The chain of Atlas in Morocco, whose highest peak is Mount Toubkal (4,165 meters), stands northwest of the Sahara.

At the southern edge of the Sahara, there are several mountain ranges, the southwest plateau of Fouta Djalon; to the south the Adamaoua and the mountains of Cameroon. West Africa has few reliefs mountain, Mount Cameroon (4,095 m), is the highest mountain. The longer river in the region is Niger, which has its sources in Fouta Djalon in Guinea and it runs, Mali, Niger, where marks the border with Benin, and then through Nigeria discharging through a massive delta into the Gulf of Guinea. Another important river of the region is Senegal, which flows in the northern part of the country of the same name and marks the border with Mauritania. In the semi-desertic area is the basin of Lake Chad (16,300 square kilometers), which is currently being gradually disappearing.

Eastern Africa is characterized by the presence of the large tectonics depressionof the Rift Valley that extends for about 4,830 km from Syria to Mozambique. Here the highlands reach high altitudes especially in the Ethiopian region where the highest point is reached by Ras Dascian (4,620 meters).

The Afar Depression (depression of Dancalia), on the border between Ethiopia, Eritrea and Djibouti, is home to the lowest point of the African continent, Lake Assal (-155 meters below sea level), which is located in the small country of Djibouti. Continuing south along the Rift Valley rise several volcanic peaks, including the mountains Kilimanjaro (5,895 m, the highest mountain in Africa), Kenya (5,199 meters) and Elgon (4,321 meters). The Rift Valley is dotted with many and immense lakes as Lake Turkana (7,100 sq km), Lake Victoria (69,490 square kilometers, the largest lake in Africa and the third in the world after the Caspian Sea and Lake Superior), the lake Alberto (5,400 sq km), Lake Kivu, Lake Tanganyika (32,893 square kilometers and a maximum depth of 1,436 meters is the second deepest lake in the world after the lake Bajkal), Lake Niassa (30,800 sq km). To the west of the Rift Valley rises Ruwenzori massif, which reaches 5,109 meters high, beyond extends the Congo River basin whose drainage basin reaches 3,690,000 sq. km, the second of the world after the Amazon.

Southern Africa is characterized by a plateau which has an average around 1,000 meters, alternated by some great depressions as the great depressions of the Kalahari desert, a large desert region which covers 850,000 sq km, and the Namib Desert. To the south is the Karroo, an arid plateau whose area is 300,000 square kilometers, beyond rises the chain of mountains of Dragons (Drakensberg), that reaches an altitude of 3,482 meters with the mount Thabana Ntlenyana.

Among the great rivers of Africa the first place it’s for the Nile, the longest river in the world (6,671 km), a tributary of the Mediterranean Sea, which attracts the waters off East Africa, followed by Congo 4 200 km long, which flows in the Atlantic Ocean, the basin of the Congo (3,690,000 sq. km) is the second largest river basin of the world after the Amazon, the Zambezi (2660 km long) and the Limpopo flow in the Indian Ocean and finally the Niger (4,160 km long) and the Orange, flow in the Atlantic Ocean.

Africa due to its north-south extension presents a wide variety of climates, it range from the equatorial tropical climate, to the desertic climate of Sahara and the Kalahari, to the subarctic climate of higher peaks. Much of the continent and in particular the northern and the southwest areas are dominated by desert or arid climate, while the central zone, crossed from the equator, has an equatorial climate, with large regions dominated by rainforest, other areas of central and south of the continent are dominated by savannah, the intermediate regions, the so-called sahel, are represented by steppe. The southern tip of South Africa and some areas that overlook the Mediterranean Sea have temperate Mediterranean climate, with temperatures not too high in the summer and mild winters.

The equatorial zone presents high temperatures, low seasonal temperature ranges, with abundant rainfall distributed throughout the year, with maximum in June and December. The tropical climate areas that extend north and south of the equator, instead presenting high temperatures and regular zenithal rainfall (ie rains are concentrated to a greater degree in periods immediately following the passage of the sun to the zenith) alternating with one or two dry periods. The desertic regions of the Sahara, the Kalahari and Namib deserts are characterized by desert climate with high temperatures in summer, little or no rainfall, considerable temperature range.

As regards the flow of tourists, according to the statistics of the World Tourism Organization (WTO), Africa with 49,300,000 arrivals of tourists in 2006 represents 5.8% of world tourism. The most visited countries in Africa are Egypt, South Africa, Morocco and Tunisia.

Africa presents for travelers interesting attractions in the first place the many different cultures of its people, then the archaeological sites, the nature, the fantastic natural landscape of this fascinating continent. In addition, we can say that, from a total of 890 sites (data updated to 2009) declared by UNESCO World Heritage Sites, 120 (13,48%) are in Africa.

2014-11-20
admin
Previous: Europe
Next: Asia: the largest and most populous continent