Pakistan: the Indus valley and its millenary civilization

Pakistan (Islāmi Jamhūrìya-e-Pakistān) is a presidential Islamic republic, with capital Islamabad. The country which is located in south-central Asia is located immediately north of the Tropic of Cancer. It borders China to the north-east to which it is connected by the Karakorum Road via the spectacular Khunjerab Pass. The Khunjerab Pass is the highest international border crossing in the world. To the east and south-east the country borders India, to the west with Iran, to the north and north-west to Afghanistan, to the south it faces the Arabian Sea.

The capital of the country is Islamabad, the most important city is Karachi, other major cities are Lahore, Faisalabad, Hyderabad, Quetta, Peshawar, Multan and Rawalpindi.

THE GEOGRAPHY OF PAKISTAN

The territory of Pakistan is crossed by the River Indus (3,180 km long, 1,165,000 sq km of the basin), which represents for the country what the Nile is for Egypt. The river flows from north-east to south-west to merge into the Arabian Sea along its course collects the water of numerous tributaries including Kabul river, which collects the Afghan Hindu Kush waters; the most fertile area of the country the Punjab, is formed from the valleys of the Indus river and its left tributaries, Chenab, Ravi, Sutlej and Jhelum carrying the water coming from Himalaya.

Along the border with India, south of Punjab, extends the sandy and stony desert of Thar. The western area of the country is formed from arid (Balochistan, which extends from the Indus valley to the border with Iran, it is a semi-desert plateau crossed by mountain ranges of Tobakakar, Siahan, Sulaiman and Kirthar, which in some places exceeding 3,000 meters high, along the south coast of the Arabian Sea is the semi-desert area of Makran. In the Indus delta is the fertile valley of Sindh at the heart of which lies the city of Hyderabad.

THE MOUNTAIN CHAINS OF KARAKORUM AND HIMALAYA

The northern and western areas of the country are mountainous, at the north-east, in the Himalaya and Karakoram chains, are some of the highest mountains of the world, within the boundaries of Pakistan are five of the fourteen mountains exceeding the 8000 meters in the planet Earth.

THE ECONOMY OF PAKISTAN

A certain importance has also the breeding of cattle, goats, sheep, chickens and buffaloes. Fishing is quite relevant. While among the subsoil reserves we find copper, natural gas, oil, salt, chromium, coal, ferrous minerals, clay, graphite. Among the industrial activities, the most important are those related to the transformation of agricultural products and the processing of fabrics.

2013-11-27
admin
Previous: The climate of Oman: when to go to Oman
Next: Philippines: volcanoes, forests and tropical beaches 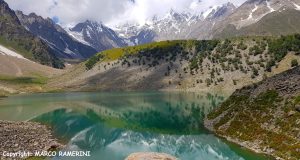 Lake Rama at the foot of Nanga Parbat 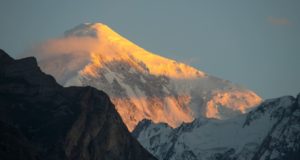 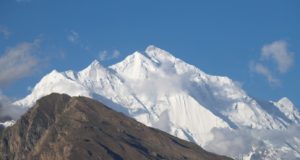